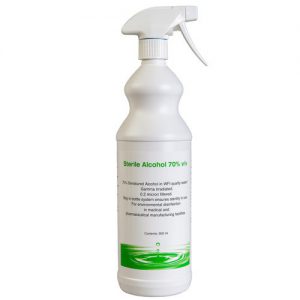 In the cleanroom setting, alcohol disinfectants refer to two chemical compounds, denatured ethyl alcohol (DE) and isopropyl alcohol (IPA) also referred to as isopropanol. IPA and DE are broad spectrum antimicrobial and are rapidly bactericidal, fungicidal and viricidal, killing most bacteria within five minutes of exposure.

IPA and DE alcohol disinfectants are not effective against bacterial spores, and have limited viricidal efficacy. In these instances, a sterile sporicidal disinfectant should be used.

Denatured Ethanol is considered more effective as a viricidal disinfectant, as isopropanol is not effective against non-enveloped viruses.

Why is Isopropyl Alcohol (IPA) so Popular in a Cleanroom Environment?

ISOPROPYL ALCOHOL is widely accepted as a good liquid for keeping cleanroom surfaces in pristine condition. But what about methyl, ethyl, or butyl alcohol? Why aren’t these types of alcohols considered for cleanroom cleaning, too? It all comes down to performance, safety, and price.

Though ethyl alcohol, like methyl alcohol, presents a much higher vapor pressure at room temperature than that of IPA (about 36 percent), the biggest problem with ethyl alcohol is that is a substance regulated by the government.

Because some people have been known to drink ethyl alcohol, the government requires it be denatured. To use pure ethyl alcohol (un-denatured) for wiping purposes would require applying for government permits and complying with usage tracking procedures — more trouble than it’s worth.

Interestingly, butyl alcohol carries a lower vapor pressure. As a larger molecule, its vapor pressure is about one-eighth that of IPA. The problems, though, are in its odour and solubility.

The problem with butyl alcohol is its banana-like odour. This would render it objectionable to most cleanroom operators, as it may be for long term use. Since Butyl alcohol has a high hydrocarbon content adding it to water limit its solubility to about 10% solution. Comparing IPA and Butyl, IPA is miscible in water at all concentrations.

Water speeds up the denaturing process of proteins, causing membrane damage. Alcohols act on bacteria by making the cell membranes permeable. Efficacy is increased with the presence of water which leads to cytoplasm leakage, denaturation of cell protein and eventual cell lysis.

The optimum concentration for disinfection purposes is between 60%-90% solution in water v/v. Typically 70% solutions are used. Higher concentrations of alcohol are in fact less effective at killing bacteria.

Cleanroom Supplies also stocks 99% IPA. This solution is effective as a surface cleaning fluid and is effective in removing adhesive residue. With its lower water content, it is more suited as a rubbing alcohol and for electronic component cleaning. It is less suitable as a disinfectant.