ISO14644 – Are you up to date with cleanroom standards?

ISO14644 is the international standard used to design, construct, validate and operate a cleanroom. For those new to cleanrooms, look at our basic concept of a cleanroom animation.

The standard was first published in 1999, and replaced the former US Federal Standard 209E in 2001. After a consultation period and amendments, Parts 1 and 2 were updated and revised in December 2015.

ISO 14644-1:2015 specifies the classification of air cleanliness in terms of concentration of airborne particles in cleanrooms and clean controlled environments.

The main improvement is in the particle sampling methods. The previous methods were dependent upon an ad-hoc approach in ascertaining the number and location of sampling points. Improved sampling methods in the revised ISO 14644-1 document along with the enhanced guidance for particle counter calibration and performance provides improved confidence to cleanroom users that their cleanroom is delivering the preferred level of quality-controlled environment.

What Are the Implications for EU GMP Cleanroom Operators?

It will impact on every GMP Pharmaceuticals cleanroom user.

The Key Changes Can Be Summarized As: 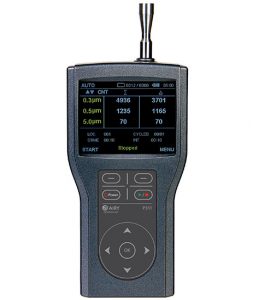 Complies fully with the latest revision of ISO14644. suitable for ISO and GMP cleanrooms.  The Airy Technology P311 stores 8,000 sample records that can be viewed on  the unit or on a computer via USB cable. The P311 complies with ISO 21501-4 and includes a one year warranty. With excellent quality and reliable performance, the Airy Technology P311 is the best priced handheld particle counter in the market.

For more information on particle counters

For more information on ISO standards check out our Cleanroom Guide.